Investment Promotion Board of Cambodia (I.P.B.C.)

The government continues to closely study Battambang province to find ways to develop it as a new heritage tourist destination, with plans to mark potential areas nearby as tourism sites.

Tourism Minister Thong Khon said that the project was being conducted in collaboration with Hungary to entice both local and international tourists – especially tourists from Hungary and other countries in the European Union.
“The ministry also plans to work with Singapore to develop tourism destinations in the outlying areas such as Phnom Kulen, Chong Khneas, Prek Toal and Tonle Sap,” Mr. Khon said, referring to Kulen Mountain and the floating villages of Chong Khneas and Prek Toal on the Tonle Sap lake in Siem Reap province.
“In order to get tourists to stay longer and spend more in Cambodia, the Cambodian government has also provided visas for one to three years for visitors from South Korea, Japan and China as well,” he added.
“The ministry has also devised plans to develop the tourism sector, including an action plan that focuses on the development of tour packages and infrastructure.”
Mr. Khon said the plan with Hungary to develop Battambang province involves the creation of tourist accommodation, improvements in transport and better security for travelers, and better enforcement mechanisms to ensure tourists are not cheated.
In 2016, Cambodia received five million international visitors, up five percent over the previous year. It brought $3 billion in income to the nation, equivalent to 13 percent of gross domestic product and directly created about 620,000 jobs, equivalent to 13 percent of the total workforce, as well as more indirect jobs, according to a report from the Ministry of Tourism.
Ho Vandy, secretary-general of the National Tourism Federation of Cambodia, welcomed Hungary’s assistance to help develop Battambang province.
“This is a dream come true for the people in the province. It will certainly make Battambang more attractive and a must-see place for tourists after they visit Angkor Wat in Siem Reap,” he said, adding that Battambang City was becoming increasingly popular as a tourist destination for both locals and foreigners.
“Previously, there were four or five hotels in Battambang City. Now, there are close to 40 hotels and guesthouses. With such development, it generates more income for people because visitors pay, stay and eat.”
Battambang province is located in the far northwest of Cambodia. The northern and southern extremes of the province’s western boundaries form part of the international border with Thailand. 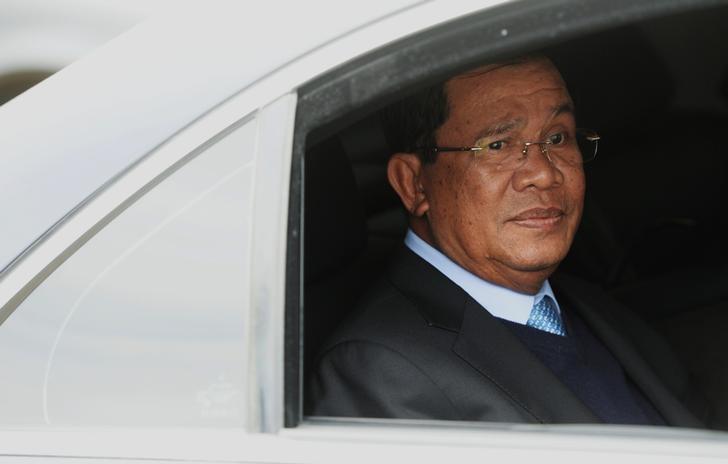 Cambodia’s Prime Minister Hun Sen looks out from a car as he arrives for a Russia-ASEAN summit at Sochi International Airport, Russia, May 18, 2016. Host photo agency via Reuters

Cambodia’s next election will be in July 2018, Prime Minister Hun Sen announced on Wednesday, as leaders of the opposition face legal charges they say are politically motivated to stop them challenging the veteran premier in the vote.

The opposition, led by Hun Sen’s longtime foe Sam Rainsy, accused the ruling Cambodian People’s Party (CPP) of cheating its way to victory and boycotted parliament for a year.

Hun Sen said in a televised speech on Wednesday the next election would be held on July 22, 2018.

“I hope there won’t be any reason to reject the election results then and make allegations that 1.2 million or 1.5 million votes are missing,” said Hun Sen, referring to accusations by Sam Rainsy’s Cambodia National Rescue Party (CNRP) in 2013 that millions were missing from voter lists.

The CPP won the election with a greatly reduced majority and Hun Sen has since reshuffled his ageing cabinet.

Critics say Hun Sen is following a two-track strategy: trying to woo back CPP voters while using the judiciary to weaken the opposition.

Sam Rainsy has been in exile since November to avoid jail on charges for which he had previously received a royal pardon.

Kem Sokha, Rainsy’s deputy, faces charges for defamation and procurement of prostitution after recordings of a telephone conversation purportedly between him and a woman were leaked.

Legal cases have also been filed against prominent CNRP members and rights workers related to the Kem Sokha case.

Last year, two CNRP lawmakers were beaten outside parliament during a pro-CPP demonstration. Hun Sen’s bodyguards were tried for the attacks.

After the shock of the 2013 vote, Hun Sen had reverted to the legal and physical intimidation tactics used in the 2008 and 2003 elections, said Phil Robertson, deputy Asia director for Human Rights Watch.

Authorities have also cracked down on civil society groups.